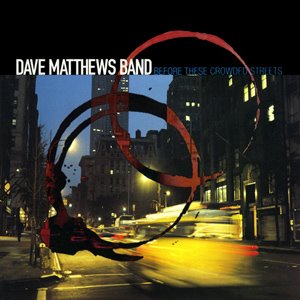 I’ve often thought of the mixed feelings that must be associated within a musician when they put together a great album. There’s so much work that to have a successful product must be so satisfying, but there must also be a sense of anxiety. To make a great album, so many things have to come together perfectly. There needs to be great songwriting, great performances, and great production. A record company would also say that the marketing of the album is key to making it great too, but so many great albums don’t get discovered until well after the record company has stopped promoting them, the art of a great album will be timeless. All three facets I mention above need to be solid. A collection of well written songs can get lost if the performance lacks depth or the production doesn’t bring it all together.
An album like Before These Crowded Streets is one of those times that songwriting, performance, and production all came together. People that loved Dave Matthews for songs like “Satellite” and “Crash” probably had a hard time initially getting their heads wrapped around BTCS, because with a couple of exceptions, the album went in a different direction that previous DMB albums. To me the album is a perfect melding of darker, minor key undertone with melodic almost anthemic bridges and choruses. There’s a common feel throughout the album. The first single released from the album was “Don’t Drink The Water” which set the tone for the mainstream reaction with it’s haunting, deep rhythm set against an uplifting chorus. Mix in Bela Fleck’s bango and Alanis Morissette’s background vocals and it’s hard to find a piece of the spectrum that isn’t used by producer Steve Lillywhite. The songs are thick but still had commercial appeal with “Stay (Wasting Time)” and “Crush” getting lots of airtime back in the day. Well worth tracking down a copy and giving it a second shot. Near perfect albums are rare, and I’m not sure Dave Matthews has released anything close to the perfection of Before These Crowded Streets. My favorites are “Pig”, “Halloween”, “Don’t Drink the Water”, “The Stone” and “Crush”.